Sometimes when I completely “wing it” and try to invent a new paleo dessert recipe it fails. No I shouldn’t say it fails – instead I successfully found a way a recipe WON’T work, but in the case of this recent Pecan Pie creation, it turned out a-maze-ing!! My Pecan Pie recipe is gluten free, refined sugar free and absolutely delicious. It smelt amazing when it came out of the oven and tasted like the real deal!

Line a spring form cake tin with baking paper by undoing the base and laying 1 sheet across the bottom and another around the inside and then close the spring. Trim the excess paper with scissors.

In a bowl, mix the cream cheese, butter, egg and rice malt syrup together.

Place batter into the bottom of the cake tin and spread to the edges.

Meanwhile, put all the ingredients for the filling in a saucepan, except for the chocolate and the pecans.

Place saucepan onto a high heat and bring mixture to the boil before reducing the heat to a simmer. Leave it simmering for 5 mins.

Add the pecans to the mixture, stirring occasionally. Allow it to simmer for a further 5 mins.

Remove the crust from the oven and allow it to cool slightly.

The crust will have risen significantly, so using your hands, press the mixture down but leave the edges risen so it forms a pie crust.

Chop or break the chocolate and scatter it over the pie crust.

Pour the pecan mixture over the chocolate ensuring it spreads evenly.

Bake the pie in the oven for 15 mins.

Remove and allow to cool. 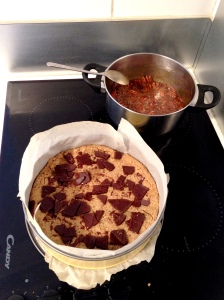 Front: the “crust” has been pushed down, the edges left risen and chocolate broken and scattered. Back: the saucepan with the pecan filling.